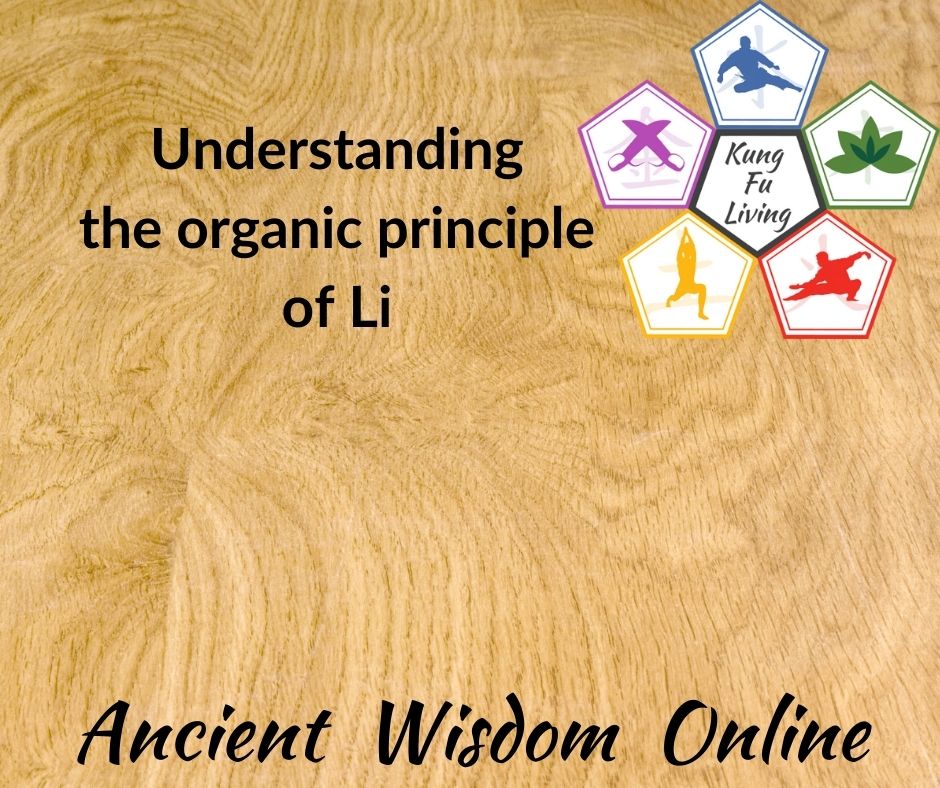 Li describes the grain in wood or jade.  Li is the reason why a willow leaning over a stream relaxes the mind and a city street, even when quiet, does not.

Li is the principle of organic order as distinct from mechanical or legal order that go by the book.  Li is asymmetrical, un-repetitive, it lacks Euclidean geometry though it might incorporate fractal theory.  It is represented by the patterns in moving water, trees, clouds, the frost crystals that form on your window.

Li is not only a pattern but a process, a path or a movement.  If each thing follows its own Li it will harmonise with all other things following theirs, not for reason of any imposed rule, but from mutual resonance.  At an individual level, it might not appear so, for nature is a mutual eating society, but when considered in the large, those species that are prey for others over produce to the degree that maintains their numbers over the long term.  It is Li for a rabbit to produce many more offspring than the local environment could support were it not for the fox following its Li by eating many of them.  We are not talking about moral judgments of right, but organic patterns of harmony.

There are movements that follow the natural dynamic of a body and are therefore, not only easier to perform, but also tend to look beautiful.  If applied to dance, invoking the concept of Li will produce movements that feel natural and once learned can be done almost unconsciously.  Such movement will feel organic.  There was a design school in Germany in the early part of the last century that was partly responsible for taking us from the Victorian tendency of adding decoration wherever there was space for it to the stark tubular steel simplicity of the mid C20.  The founding principle of the Bauhaus school was that “Form should follow function.”  The idea was that a jaguar, for example, was beautiful essentially because it was ‘designed’ to perform a particular job perfectly; chasing and killing its prey.  The belief was that nature/evolution tended to produce beauty as each part tended to function best/easiest within the context of its environment.

This idea applied to Kung Fu should produce the easiest techniques to do a job efficiently without unnatural, ungainly, difficult and superfluous movements.  Some systems have techniques that are over fancy and stylised or awkward and unnatural, often for the sake of producing artificial degrees of difficulty.  Such deliberate complexity is designed to create a monopoly of skill for those at the top of a hierarchy.  Like sophisticated social etiquette, its purpose is to identify and exclude those who don’t know it.  Sometimes techniques are artificially complex and awkward to work around an abstract obstacle, like the rules of a martial sport where a complicated, but essentially safe, move might replace an easier, but dangerous, one.  Sometimes over complex techniques have developed because they are entertaining to watch and the increased skill required is itself impressive to watch.

Li as a principle does not only apply to individual techniques.  It can also apply to a process, for example, learning/teaching.  There are natural, organic and holistic processes for humans to learn and of course there are artificially difficult approaches that have been used in teaching.  Always aim to have Li as a guiding principle, not only in Kung Fu, but in life generally, for it is an integral part of the Tao when understood as the way that is in harmony with nature.