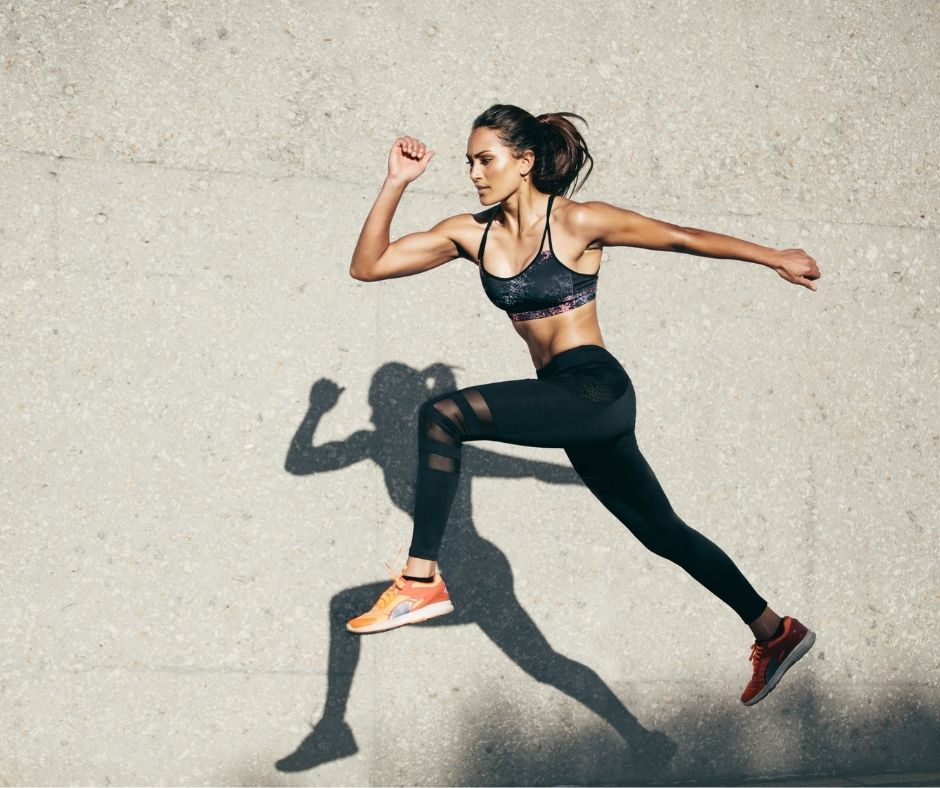 It’s January and you want to lose some fat, particularly after nearly a year of lockdown or at least limited activities.  You know that cutting out sugars and the low fibre carbs generally will do most of the heavy lifting in this process, but you want to know the best exercise to help.

In the last blog about how much exercise to do to get fit I said that the evidence suggested that short bursts of sprinting looked like being the best option and in this blog I want to explain how this helps in fat burning too.  Remember, when I say sprint, that could involve, running, but could also be rowing, squatting, punch-bag work or any other activity that you do flat out.

For you to understand this properly, I have to delve into the science.  I think it is important for motivation and long-term commitment to any exercise regime that you understand, as well as you can, why a particular regime works.

This is why I was keen to explain why a high intensity exercise, a sprint that is, produced prolonged period of fat burning.  The problem is that while I could repeat what the text books say, I don’t understand it.  My personal grasp of biochemistry is not sufficient.  For those who are familiar with the functions of adipocytes, triacylglycerol mobilisation, adrenaline, glucagon, hormone sensitive lipase, albumin, beta-oxidation and glycerol to glucose conversion in the liver, then the metabolism of fatty acids is obvious.  For the rest of us less educated folks, a simple description will have to suffice.  So here is, as detailed as I can understand it, the process by which high intensity training causes a high level of fat burning.

The process is call glycogenolysis which means it is about how sugar is processed.

Some glycogen (a form of sugar) is stored in muscles for on-site use only.  In an emergency, or high intensity exercise this is used.

Some glycogen is stored in the liver, which is used to maintain a balance of it in the blood.

When the glycogen in the muscle is used (not significantly in gentler exercise) insulin carries more glucose into the muscle.

This causes a knock-on effect of fatty acids being mobilised for energy.

Unlike gentler forms of exercise and a careful diet, that cause a one for one cell chain effect. (So one molecule of glucagon releases one molecule of glucose off glycogen). High intensity exercise convinces the body that it needs to prepare for a fight or flight response.  So one enzyme instead activates up to a hundred of the next step, in a multi-step process.  The enzyme process is amplified exponentially, so that you’re now cleaving thousands of molecules of glucose simultaneously for immediate and emergency use.

The same system that amplifies the release of energy, also impairs the process of energy storage.

The effect lasts several days, as the receptors on the muscle cells become more sensitive to insulin as they need to replenish the energy used.  If your muscle stores remain full, you stack up glucose and it gets stored as fat.

That means that high intensity exercise, in addition to making you feel more energetic, also means you won’t be storing fat.

A text book will explain how the phosphofructokinase enzyme gets inhibited so the glucose can only go to the level of fructose-6-phosphate on the glycolysis cycle, thus getting shunted over to the pentose phosphate pathway, converting the glucose glyceraldehyde-3-phosphate (also known as triose phosphate or 3-phosphoglyceraldehyde) which is a fat precursor.

But as that sound like so much gobbledygook to me, (yes, I copied it exactly) I’ll just say that if your sugar stores are full and you then eat more carbohydrates (another form of sugar) it will stimulate the production of fatty acids, particularly in the liver, which drives up the very low-density lipoproteins, which are converted to LDL cholesterol, a marker for cardiac risk factors.

Low-intensity exercise, aerobics, steady-state, often referred to as “cardio” activity does not tap the fast-twitch muscle fibres that possess the most glycogen.  Consequently, the muscles are not emptied of significant levels of glucose, with the result that the circulating glucose has nowhere to be stored, except as body fat.

Also, muscle cell walls lose their sensitivity to insulin but become inflamed by the high levels of insulin that the body has produced to deal with the high level of circulating glucose.  The body uses the LDL cholesterol to mortar up this inflammation, putting the low intensity exerciser at risk of cardiovascular problems, especially if they then eat extra carbs.  (something we are all tempted to do after a long workout)

In case anyone thinks that “at least hours of low intensity exercise will burn a lot of calories”.  Well, not really, no exercise really burns a lot of calories.  Running 35 miles will burn about a pound of fat.  An hour workout might burn an extra 200 calories, but the resulting increased appetite can very easily put that back.

However high intensity exercise will activate hormone sensitive lipase.  This permits mobilisation of body fat.  If insulin levels are high, (typically the case with high carbs and no high intensity exercise) even in the face of calorie deficit, hormone sensitive lipase will be inhibited and mobilising fat will be essentially impossible.  Hence people who diet and take up jogging will find it very difficult to lose body fat.  Especially if they have dropped fats in favour of carbs.